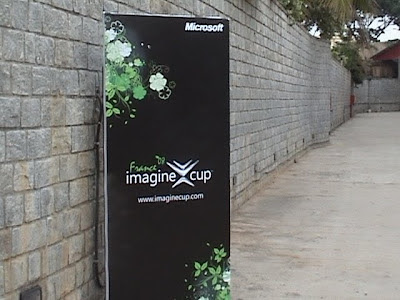 These are the Eight teams selected for the Imagine Cup National Finals in Software Design Invitational challenge...

Anuj Kumar
Ishan Bishnoi
Prateek Khurana
Ravi Atluri
Details :
A system to connect those who want to dispose of “garbage/junk” with those who might have innovative uses for the same. The system also gives potential users of such items optimal collection-paths to collect all the items in a locality.
From :
Dhirubhai Ambani Institute of Information and Communication Technology, Gandhi Nagar

Aadhar Mittal
Gagandeep Singh
Sandeep Bansal
Shobhit Sinha
Details :
A citizen-activism-based solution that exhorts the public to take photographs of environmental issues in their daily life, and to send the same via mobile-phone to a centralized grievance-redressal agency, which can then disseminate the information to appropriate NGOs.
From :
Delhi University

Apurva Arvindakshan Nair
Charu Rajkumar Jain
Ishita Sunity Chakraborty
Mamal Jayendra Karani
Details :
An ecological e-Governance mechanism that gathers information from different service-providers about usage by citizens, and then calculates corresponding carbon-emission-levels. Ecological-performance reports are also generated for individuals, based on which they can be taxed.
From :
Vivekananda Educational Society’s Institute of Technology, Mumbai

Abhishek Chhajer
Amit Prakash Ambastha
Archit Jain
Sasank Tatinen
Details:
A system that accepts inputs from the public on the preferred locations for civic utilities and resources such as sewers, dust-bins, etc. The system then uses Vertex Cover algorithms and K-Means algorithms to determine the most suitable location for the same, thereby offering an ideal blend of democratic participation and scientific rationale in town-planning.
From :
Chennai Mathematical Institute
Dhirubhai Ambani Institute of Information and Communication Technology, Gandhi Nagar

Arpita Shrivastava
Kshitij Shukla
Rohit Bhat
U. Karthik
Details :
An interactive application to dynamically guide farmers as to which crops are best suited to their soil, water and weather conditions, which fertilizers, irrigation schemes, and other agricultural methods to use. The application also assesses the effect of the current crop on the soil condition and suggests the crop that should be sown next, which it then iteratively uses to suggest a series of crops to grow one after the other.
From:
National Institute of Technology, Kurukshetra

Krunal Dedhia
Paras Doshi
Saili Dharia
Veenit Mavan
Details :
A self-configurable wireless-sensor mesh-network system that monitors and analyzes agricultural-soil parameters such as moisture-content, nutrient composition, temperature, pressure, and light. This system can be used by the government or NGOs at a large scale in order to provide recommendations to farmers on crop-related decisions.
From :
Vivekananda Educational Society’s Institute of Technology, Mumbai

Abhishek Kumar
Gaurav Paruthi
Shubham Malhotr
Details :
A mobile-phone-based application that uses Web-services to share real-time data with potential buyers of products at the point-of-purchase. The data contains information on the carbon-footprint of each product and aims to educate potential buyers into making smart and ecologically empathetic choices.
From:
BITS Pilani, Goa Campus 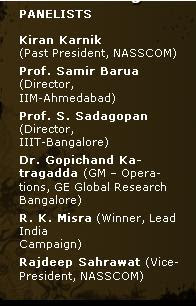 Out of these eight teams again three (Skan, Novices@work, Green Waves) were shortlisted and these three teams had the opportunity to present their ideas to all the delegates and to all other attendees which was really marvelous. Finally NOVICES@WORK were the winners of the national finals.They will be going to Paris to compete in the Finals of the Imaginecup. For more insights into their project/idea see the video .......


Read an article on "The Hindu"
15 comments:

As I am passionate towards robotics and have worked on speech recognition and natural language processing,I wanted to work on "Robotics" ( related to software), I mean controlling the Robot hardware from software! Searched on internet and found this cool software known as Microsoft Robotics, started working on Microsoft Robotics Studio last month, finally read some MSDN documentation and as I don't have Robot Hardware thought of trying out the simulation, its real fun controlling the robot in simulation so Just wanted to share with you , on 'How to Simulate I-Robot Create using Visual Programming Language', Before watching the video make sure you download the Microsoft Robotics Studio v1.5. Install it on your computer and then just see the video! Feel totally free to leave comments/queries.
Click to download the video

Graphics rendering is done using AGEIA Physx technology. In order to get full graphics experience, your computer should support pixel shader 2.0 or higher, Asap I will be uploading a video on "how to control a i-robot from your PC using C#(.net)" so keep in touch with my blog :-)
One more thing, If you already have a robot and you want to use MSRS to interact with it then download Microsoft Robotics Developer Studio 2008 CTP and read the manuals and hmmmmm.... Well I am still working on it, will write about it as soon as I am finished with it.

For some background theory on MSRS have look at my ppt!

| View | Upload your own

A new competition known as ROBOCHAMPS is introduced! check it out and sign up for a challenge. Watch this video , its about Robochamps