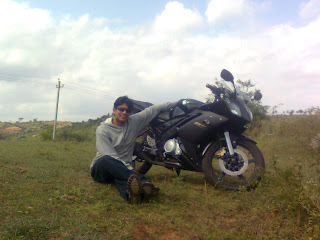 For the past few months I have been away from the blogosphere... due to frequent "F-U-D" . First of all I would like to share information about my new bike - Yamaha YZF R-15 .

Why did I buy R-15? Why not Pulsar 220cc?
People have been asking me this question! For heaven's sake don't compare Pulsar with Yamaha! its like comparing "sunny" with "R1" :O..

Yamaha R-15 is a subset of Yamaha R1 and it looks SEXY HOT!
It has a liquid cooled engine which is far better than oil cooled or air cooled. Idling rpm is 1500rpm which is normally prevalent in high-end racing bikes!
and moreover it is powered with Yamaha Engine.
The feel is Ultimate!The power is simply awesome!

So within 5 days i covered 1000km. Had been to Savandurga, Manchinbelle Dam, almost near Mysore, KailasaGiri-Chintamani. Will be posting few videos of my stunts on R-15 asap. :P 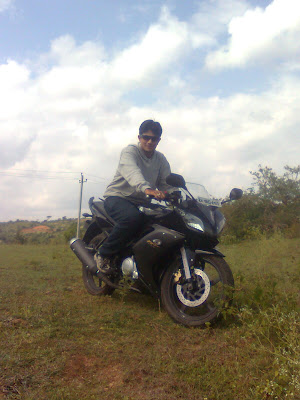